Home / Events / Stepping Out of The Box Art Exhibition

I've not been to a spoken word event before and I'm pleased to have experienced it. The performers said some interesting and thought-provoking stuff! I'm pleased my girls had the opportunity to be part of the process.

Parent of youth participant, Stepping Out Of the Box

Check out what’s available below.

Stepping Out of The Box Art Exhibition 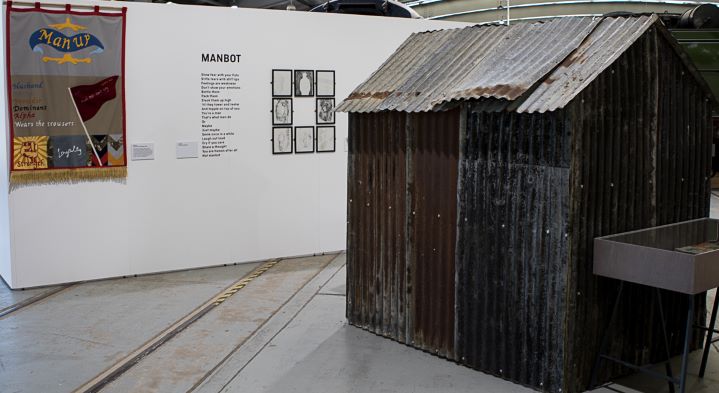 Led by our Artistic Director Polly Turner, young people from Parkside Academy, King James I Academy, Teesdale School and Wolsingham School have created artwork that has been incorporated into our original art exhibition – Stepping Out of The Box – which kicked off at Locomotion and has now moved to Durham University.

This original artistic exhibition aims to develop a dialogue and initiate conversations around gender roles and aspirations. It is the culmination of a series of creative workshops in which young people began to question destructive social pressures and explore healthier alternatives together with Changing Relations.

The creative process began with a visit to our precursor exhibition – Men’s Voices – whilst it was on display at The Witham, in Barnard Castle. This exhibition had been created through asking “What does it mean to be a man?” in a series of participatory workshops with groups of men and boys across the North East, exploring the positive and negative stereotypes that surrounded their understanding of masculinity.

But in creating our brand-new exhibition, Stepping Out of The Box, we did not only work with males. When we originally piloted Men’s Voices with marginalised teenage boys in 2017, their female peers had clamoured for a project just for them. A one-off taster session uncovered girls:

We have a 6-year history of developing awareness-raising work around domestic abuse and this rang alarm bells for 2 key reasons:

This led us to conclude that it was important for all of us – boys and girls, men and women and everyone in between – to have the opportunity to consider the value of the masculine and feminine ‘boxes’ we tend to squeeze ourselves into, mostly without even realising we are behaving according to messages from society about how we ‘should’ be as a man or a woman, or questioning whether these messages are always helpful or healthy.

The workshops artist Polly Turner ran with groups of boys and girls across the Northern Heartlands therefore explored themes of gender equality and identity, how childhood toys shape adolescence and the destructive or limiting impact that cultural norms and social pressures can have on mental health, wellbeing and aspirations.

The resulting exhibition – Stepping Out of The Box – contains brand new collage, monoprint, textile and poetry which sets out to question the relevance, today, of traditional masculine and feminine labels, and the impact of trying to fit into these prescribed ‘boxes’; examining the messages we recognise, receive and share.