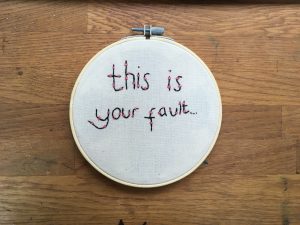 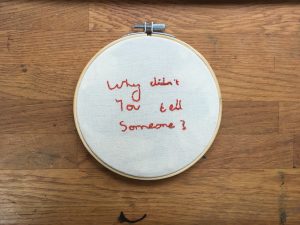 We’re so pleased to see The Pool supporting the fantastically important We Level Up campaign calling for responsible, respectful reporting of Domestic Homicide. We’ve long been infuriated by the implications of disbelief when the media focus on how many people thought a Domestic Abuse perpetrator was wonderful.

Our film – Make Do and Mend– features the real words of Domestic Abuse survivors who testified to the tendency of their abusers to manipulate perceptions.

“He was a Jekyll & Hyde, wasn’t he? Because there was a lovely side to him, so polite & kind outside, but when we were on our own…”

This is a crucial insight for us to reckon with: that abusers can be charismatic individuals & indeed that they may even invest energy into charming others to lay the ground for them not to believe their victim’s story when it comes to light.

Think this is unlikely?

“It didn’t matter what you were saying, if he thought you said something different, ‘That’s what you said,’ & no matter even if you explained it, ‘Na, you said this!’ But he could twist things round to have the excuse of, like, screaming more at you or putting you down more.”

These are examples of gas-lighting from the script of our film, taken from the words of 2 different Domestic Abuse survivors. Gas-lighting is a strategy of Psychological Abuse that involves trying to make your victim doubt their own perceptions, manipulating them into thinking they imagined the abuse they experienced.

Imagine if you knew how ‘polite & kind’ your partner came across in public. Of course you would fear that no-one would believe you could be a victim of abuse behind closed doors.

Now factor in that your perpetrator was working to make you doubt your own perceptions. How could you possibly feel confident of being believed.

Finally, throw in a media report about a woman murdered by her partner that focuses on all the neighbours & colleagues testifying to how respected the alleged perpetrator was in the local community.

What do you imagine the impact of this would be on a someone who has themselves experienced Domestic Abuse?

Is it not an example of collective gas-lighting from the media?

Is there not an implication of an underlying question from all those people quoted in the article, ‘Is she really telling the truth? Could this really be true?’

And then we wonder why women don’t ‘just leave’ abusive relationships. But what if we have contributed to their feeling that it would be impossible to tell their story with the weight of our implied disbelief?

At Changing Relations, we have devised training to help professionals understand these dynamics in order to inform a more empathetic response to survivors they encounter, whether they be colleagues or service users, based on an understanding of the impact of Domestic Abuse & how difficult it actually is to leave an abusive partner.

It’s fantastic to see a campaign calling for the media to consider the implications of their usual approach to reporting around Domestic Abuse & Homicide. Here’s hoping they take note!

Posted in Directors blog and tagged campaign, domestic abuse, film, gas-lighting, media, perpetrator, psychological abuse, training, victim
We use cookies to ensure that we give you the best experience with our website, but these cookies store no personal data.
If you continue to use this site we will assume you're happy with this. Accept
Privacy & Cookies Policy